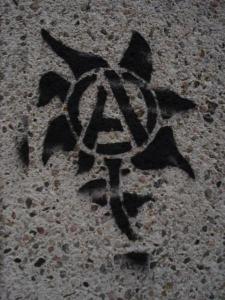 Nate started a great thread over the masculinist undercurrent of ‘militancy.’ (my response would be: we’ve never been militants)

I like Jasper’s suggestion – there are two texts that are a must along those lines.

Second is “this is not the black bloc” by Claire Fontaine.  Half of CF was deeply involved in Tiqqun, and was part of the 2001 split that was in part due to disagreement over militancy.  http://fendersen.com/black_bloc.htm

In a much more American context, there was an early piece written called “She Doesn’t Give a Fuck About Your Insurrection.”  The approach of the text is deeply problematic, in my view, because it was written as a provocation piece.  The result was equally polemical responses that didn’t get to the heart of some of the issues of the American readings of Tiqqun.  Look to Infoshop and Anarchistnews to see the extensive “comments”.

The group most responsible for the American punk reception of everything Tiqqun/TCI is “The Institute for Experimental Freedom” / “Politics is Not A Banana.”  Interestingly enough, they ride the 2000s enthusiasm for everything queer in anarcho-punk circles, and had a strong influence in the direction of great lakes-area Bash Back taking an “insurrectionist” turn.  In my opinion, I think they fundamentally don’t understand 80s feminism, esp French Feminists like Irigaray/Kristeva and American Socialist Feminism which are the intellectual predecessors to everything that was 90s Queer Theory.

Personally, I have a specific read on Tiqqun.  It was such a large group, compromised of many voices, that it never had a single perspective.  There are elements that thirsted for an almost religiously-pure politics of militancy and others who resisted it with nearly all the fiber of their being.  The 2001 split of Tiqqun sort of demonstrated the impossibility of keeping those voices along for too long.  One of the important discussions of the group going on in the group at the time, was what the form of Tiqqun 3 (if it was made) would be.  Most in the group acknowledged that the comrades they were trying to immediately reach out to didn’t have the same academic background they did, and to ask them to be up on theory before being able to hold these conversations was a bit selfish.  For example, what you see with the “invisible committee” is largely (but not completely) an advancement in the collective writing machine of the militant faction to a stage where they think they can adequately convey complex theoretical ideas clearly without limiting the audience to theory-heads.

There’s a fun debate over what happened about T3, most around film as a medium (a few of the Tiqqun folks were pretty enthralled by Debord and so they emulated his film style).  In a shameless plug of my recent blog, I’d direct you to look at the post I have on it: https://anarchistwithoutcontent.wordpress.com/2010/04/27/get-rid-of-yourself/

On a personal note, because I’m pretty deep in the Deleuze stuff, I don’t think anyone’s really reading their Deleuze (or at least, not very closely).  So the word “war machine” has become pretty popular in some circles, but they don’t seem to understand it much, if at all.  Unfortunately D&G’s choice of war machine is confusing — Paul Patton in Deleuze and the Political, for instance, has suggested completely dropping the ‘war machine’ name for something more self-evident.  Tiqqun was aware of this — in “Introduction to Civil War” which was just released by semiotexte, their proposition on War Machine gets it clearly: the primary operation of war machines is the creation of organic connections (or in Kantian terms, a synthesis).  War is only a secondary operation of the war machine, a degradation/degeneration of its primary purpose.  In practical terms, all the recent attempts to synthesize the war machine with the insurrectionist talk on “attack” is foolish and theoretically incongruent — war machines (or at least nomadic ones) don’t attack, they defend.  And at most, they pre-emptively defend (which is advocated by TCI).  There’s more to be said about their model of “war” which is non-sovereign and therefore not war in my book, but this is not the place.

Some of the mis-understanding might be a poor conception of the rapport between capital and the state. Tiqqun has pretty much scrubbed almost all talk of capitalism from their writing, but they take the Deleuzian innovation that capitalism is a difference machine to its logical extension (much like Hardt and Negri) — totalities aren’t pre-existing, but must be constructed.  And for all practical purposes, that means that totalities function like open systems (they use the post-structuralist concept ‘dispositif’ extensively) and therefore don’t need “attack” to making openings.  Like even Althusser’s conception of ideology – it parades like a universal system, but it in fact partial, narrow, and contradictory.

In the end, I think there’s a sort of adoption of “siege mentality” or “bunker mentality” that is nefariously deployed.  I am personally suspicious of their proximity to Schmitt (something I know we both share), and at times Tiqqun as well as the Americans are willing to admit that “attack” plays a much more internal-compositional function than an outer function (which is why attack is rarely tied to ‘expropriation’ in any meaningful sense or really strategic-tactical in the guerilla sense).  The problem, of course, is that if your internal composition is largely based on the shared belief in a fear for existential existence, it not only has masculinist undercurrents but can easily go bad.

OK.  That’s enough for now.  All the best.I like Jasper’s suggestion – there are two texts that are a must along those lines.

Note — it might be fruitful to revisit Spivak’s feminist criticism of left-appropriations of schmitt [[ https://anarchistwithoutcontent.wordpress.com/2010/02/01/spivak-on-derrida-on-schmitt/ ]]

13 thoughts on “the gender politics of militancy”