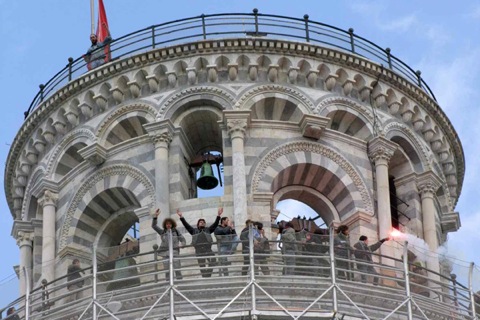 The Leaning Tower of Pisa occupied by students, November 24, 2010

«It could be interesting to look closely at the classics the students chose to put on their shields. Let’s look at the frontline.
Boccaccio’s Decameron, which is about people sharing stories while waiting for the plague to end.
Asimov’s The Naked Sun, which is the description of a world where humans no longer touch each other.
Melville’s Moby Dick, which is an epic tale of obsession.
Cervantes’ Don Quixote, ie the story of a proud, noble man led astray by an obsolete ideology (the chivalrous one).
Petronius’ Satyricon, that is, the description of a greedy, decadent power.
Henry Miller’s Tropic of Cancer, that is, a piece of «auto-fiction», a scandalous mix of autobiography and fiction.
Lenin’s What Is To Be Done?, which deals with the problem of organization.
Deleuze & Guattari’s A Thousand Plateaux, that is, the theme of nomadism, the nomadic war machine.
Shall we summarize? […]
Our world is infected by the plague (Decameron).
The plague is the atomization of social relationships (The Naked Sun)
Those who refuse this state of things are often prey to an obsession that cripples their initiatives (Moby Dick), that is to say: the obsession with “Him,” Silvio the Malignant Whale, this «berluscocentrism» affecting the public discourse.
This obsession becomes an ideological barrier and causes us to attack windmills that are put in front of us as baits (Don Quixote).
The risk is to be mesmerized by the scene of an outraged, sex-addicted, ever-carousing power (Satyricon).
We will avoid such risk only if we find a new story, a narrative of ourselves that will break into this world as a real scandal (Tropic of cancer), as opposed to all the fake scandals we see in the media. The emergence of a new, unified, conflict-bearing subjectivity would be the only truly intolerable scandal. «For it must needs be that scandals come», says the old maxim [Matthew, 18,7].
Hence the problem of organization (What Is to be done?) And, perhaps, the need to re-read Lenin, rejecting what is to be rejected, revamping what can be revamped.
Of course, today the process of organization can no longer aim at building the party of the proletariat as in the 20th century: organization must take into account the enemy’s superior mobility, it must make us able to fight in an ever-changing situation, a scenario of constant deterritorialization (A Thousand Plateaux).
However, without a narrative, without stories to be told in the night around the campfire, any guerrilla warfare in the desert is doomed to failure. And so we return to the first book, the Decameron: it is thanks to the stories we tell one another that we can prevent the spreading of the plague […]
Well, Q is the only book in the “Book Bloc” whose authors are still living. Should they have chosen only dead writers? We might say that Q represents the “here and now” of the struggle, the need to act now.» 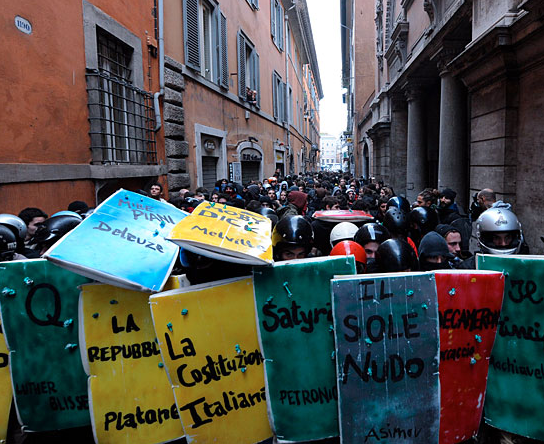 –from “The Only Truly Intolerable Scandal / #demo2010“

One thought on “A Novel Form of Protest”