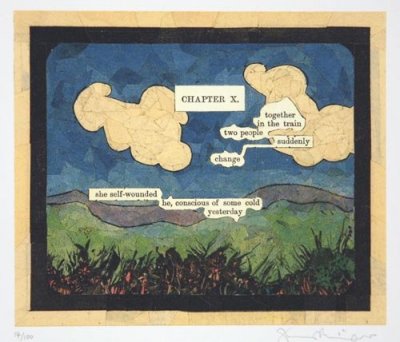 As the phrase goes, “the communication between two terms generates an independent third.”

Resonance isn’t found by plumbing the interiority of two singularities, or even their overlap. (A U B)

Rather, resonance is an external force in-between singularities that incites forms of content and expression.

Dominic Smith’s response article to Badiou’s Clamour of Being is an amazing descriptive piece that lays the groundwork for theorizing this form of inter-action:

New image of communication: [more or less copy/pasting, some rewording]
Signs are never univocal packets of information but rather affective charges.
They require the relation between singularities to determine and prolong their resonance.
Communication involves entering into new and affective relations with singularities.
And a condition for new relations is the capacity of singularities to express their difference.

Fascism results from a perception of “making sense” as a way of attaining knowledge and power over other individuals.

Sense is what individuals create in order to make their non-equivalent experiences resonate and communicate.

Lines of flight are the intensities generated _in between_ being-affected and becoming-adequate [[adequate in the Spinozist sense]]. They are, in short, the conditions that give an individual’s “making sense” or becoming-adequate its motive force. As individuals, we are traversed by different lines of flight which we attempt to make resonate through expression and the production of sense. Sometimes our lines meet in tension. Sometimes they are blocked or deflected. At other times they meet in harmony, creating vaster lines of collective expression and communication. The point, in any case, is that our lines of flight never transcend one another. What counts on a line of flight is never the transcendence of ‘‘destination,’’ the ending for a voyage or a story but rather the production of connective intensities in flight, in media res.

******PS: Spinozist-Negriist enthusiasm of this new metaphysics deserves careful critique. Resonance is a different way of _considering_ communication, not a uniquely “left” or “radical” model. The obvious intent is to generate a radical politics, but explaining communication via resonance should not mean celebrating all the forms it generates – it has as many positive and negative uses as any other model. [as D&G remind us in the Micropolitics and Segmentarity plateau of ATP – resonance is a state strategy!]

3 thoughts on “Resonance: A New Image of Communication”