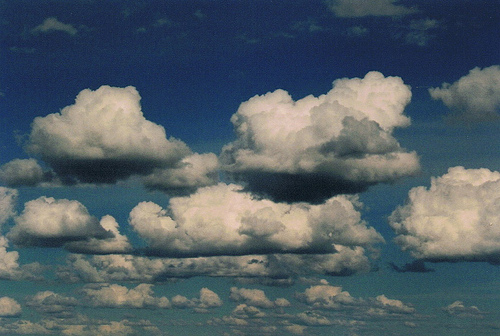 if empire ain’t a thing, then is it a haecceity (a fog, a wind, a storm, a summer, an hour)? there’s all this talk about ‘the multitude’ being a haecceity. but let’s clarify our terms so we’re not caught up in ‘multitude is better than empire because it shares an ontologically privileged status’ or all that other mumbo-jumbo we’re been hearing. …

There is a mode of individuation very different from that of a person, subject, thing, or substance. We reserve the name haecceity for it.33 A season, a winter, a summer, an hour, a date have a perfect individuality lacking nothing, even though this individuality is different from that of a thing or a subject. They are haecceities in the sense that they consist entirely of relations of movement and rest between molecules or particles, capacities to affect and be affected. When demonology expounds upon the diabolical art of local movements and transports of affect, it also notes the importance of rain, hail, wind, pestilential air, or air polluted by noxious particles, favorable conditions for these transports. Tales must contain haecceities that are not simply emplacements, but concrete individuations that have a status of their own and direct the metamorphosis of things and subjects. Among types of civilizations, the Orient has many more individuations by haecceity than by subjectivity or substantiality: the haiku, for example, must include indicators as so many floating lines constituting a complex individual. In Charlotte Bronte, everything is in terms of wind, things, people, faces, loves, words. Lorca’s “five in the evening,” when love falls and fascism rises. That awful five in the evening! We say, “What a story!” “What heat!” “What a life!” to designate a very singular individuation. The hours of the day in Lawrence, in Faulkner. A degree of heat, an intensity of white, are perfect individualities; and a degree of heat can combine in latitude with another degree to form a new individual, as in a body that is cold here and hot there depending on its longitude. Norwegian omelette [‘Baked Alaska’, Deep Fried Ice Cream]. A degree of heat can combine with an intensity of white, as in certain white skies of a hot summer. This is in no way an individuality of the instant, as opposed to the individuality of permanences or durations. A tear-off calendar has just as much time as a perpetual calendar, although the time in question is not the same. There are animals that live no longer than a day or an hour; conversely, a group of years can be as long as the most durable subject or object. We can conceive of an abstract time that is equal for haecceities and for subjects or things. Between the extreme slownesses and vertiginous speeds of geology and astronomy, Michel Tournier places meteorology, where meteors live at our pace: “A cloud forms in the sky like an image in my brain, the wind blows like I breathe, a rainbow spans the horizon for as long as my heart needs to reconcile itself to life, the summer passes like vacation drifts by.” But is it by chance that in Tournier’s novel this certitude can come only to a twin hero who is deformed and desubjectified, and has acquired a certain ubiquity?34 Even when times are abstractly equal, the individuation of a life is not the same as the individuation of the subject that leads it or serves as its support. It is not the [pg 262] same Plane: in the first case, it is the plane of consistency or of composition of haecceities, which knows only speeds and affects; and in the second case, it is the altogether different plane of forms, substances, and subjects. And it is not in the same time, the same temporality. Aeon: the indefinite time of the event, the floating line that knows only speeds and continually divides that which transpires into an already-there that is at the same time not-yet-here, a simultaneous too-late and too-early, a something that is both going to happen and has just happened. Chronos: the time of measure that situates things and persons, develops a form, and determines a subject.35 Boulez distinguishes tempo and nontempo in music: the “pulsed time” of a formal and functional music based on values versus the “nonpulsed time” of a floating music, both floating and machinic, which has nothing but speeds or differences in dynamic.36 In short, the difference is not at all between the ephemeral and the durable, nor even between the regular and the irregular, but between two modes of individuation, two modes of temporality.

We must avoid an oversimplified conciliation, as though there were on the one hand formed subjects, of the thing or person type, and on the other hand spatiotemporal coordinates of the haecceity type. For you will yield nothing to haecceities unless you realize that that is what you are, and that you are nothing but that. When the face becomes a haecceity: “It seemed a curious mixture that simply made do with time, weather and these people.”37 You are longitude and latitude, a set of speeds and slownesses between unformed particles, a set of nonsubjectified affects. You have the individuality of a day, a season, a year, a life (regardless of its duration)—a climate, a wind, a fog, a swarm, a pack (regardless of its regularity). Or at least you can have it, you can reach it. A cloud of locusts carried in by the wind at five in the evening; a vampire who goes out at night, a werewolf at full moon. It should not be thought that a haecceity consists simply of a decor or backdrop that situates subjects, or of appendages that hold things and people to the ground. It is the entire assemblage in its individuated aggregate that is a haecceity; it is this assemblage that is defined by a longitude and a latitude, by speeds and affects, independently of forms and subjects, which belong to another plane. It is the wolf itself, and the horse, and the child, that cease to be subjects to become events, in assemblages that are inseparable from an hour, a season, an atmosphere, an air, a life. The street enters into composition with the horse, just as the dying rat enters into composition with the air, and the beast and the full moon enter into composition with each other. At most, we may distinguish assemblage haecceities (a body considered only as longitude and latitude) and interassemblage haecceities, which also mark the potentialities of becoming within each assemblage (the milieu of intersection of the longitudes [pg 263] and latitudes). But the two are strictly inseparable. Climate, wind, season, hour are not of another nature than the things, animals, or people that populate them, follow them, sleep and awaken within them. This should be read without a pause: the animal-stalks-at-five-o’clock. The becoming-evening, becoming-night of an animal, blood nuptials. Five o’clock is this animal! This animal is this place! “The thin dog is running in the road, this dog is the road,” cries Virginia Woolf. That is how we need to feel. Spatiotemporal relations, determinations, are not predicates of the thing but dimensions of multiplicities. The street is as much a part of the omnibus-horse assemblage as the Hans assemblage the becoming-horse of which it initiates. We are all five o’clock in the evening, or another hour, or rather two hours simultaneously, the optimal and the pessimal, noon-midnight, but distributed in a variable fashion. The plane of consistency contains only haecceities, along intersecting lines. Forms and subjects are not of that world. Virginia Woolf s walk through the crowd, among the taxis. Taking a walk is a haecceity; never again will Mrs. Dalloway say to herself, “I am this, I am that, he is this, he is that.” And “She felt very young; at the same time unspeakably aged. She sliced like a knife through everything; at the same time was outside, looking on…. She always had the feeling that it was very, very dangerous to live even one day.”38 Haecceity, fog, glare. A haecceity has neither beginning nor end, origin nor destination; it is always in the middle. It is not made of points, only of lines. It is a rhizome.