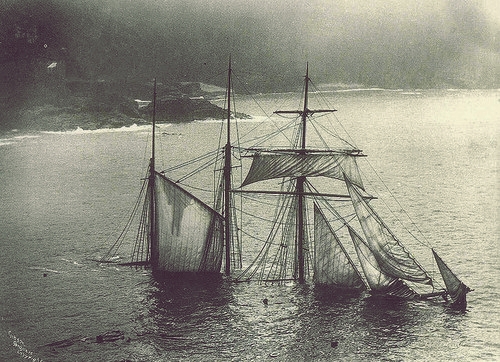 The domination-resistance paradigm has been replaced by modulation that de-centers power and makes it impossible to cut the head off of the king.  Resisting the clutches of the school didn’t make one free of the police, or even the asylum for that matter.  It was only vulnerable to entropy and sabotage.  But when considered with the even more complicated relational network of control societies, formulating a radical political project on resistance to domination is inadequate.  Contemporary resistance has to consider that governance thrives primarily off of transgression.  Capitalism is crisis, and the State gets legitimacy and power from managing them.  Addressing problems or even provoking a crisis is where governance works best. The path to resistance requires being both faster and slower than capital, to be more collective but more selective, and to be more free but also more committed.

You’ve got to take the good with the bad. Just as Marx criticized the Proudhon for imaging capitalism to have a good side that could be kept and a bad side that could be left behind, we can criticize attempts to simply become-communist without a fight.[1] A naïve illusion that ‘it’s always better in analog’ follows a Luddite logic that will only end in defeat. Communism, or the revolution, or whatever, will have to come from a unique combination of speed up and slowing down. It’s not just about being joyous, then you’re only thinking about yourself. Don’t leave it purely up to change, think like a writer planning out a monograph; you need to cast your gaze wider in order to find the right combination of joy and sadness.

This is how it should be done: Lodge yourself on a stratum, experiment with the opportunities it offers, find an advantageous place on it, find potential movements of deterritorialization, possible lines of flight, experience them, produce flow conjunctions here and there, try out continuums of intensities segment by segment, have a small plot of new land at all times. It is through a meticulous relation with the strata that one succeeds in freeing lines of flight… [ATP]

Faster But Slower: We are much faster than global capitalism.  It injects the world with pregnant potential before the slow process of capture catches up to complete the revolution of its gigantic circuit.

So here are a few things to consider:
1)   Hijacking often overwhelms the original. Contra Baudrillard, Deleuze reminds us the simulacrum carries the potential to differ. So much so, that the original can have less power than its iterations. The internet is full of examples, they usually go by the name of “memes.” A picture from some obscure video game, anime character, or web-user is made into the face for an event. While a significatory reading would try to ask why that particular image was chosen, they lose track of the real force behind its (more or less) meaninglessness: the event. Like the schizophrenic body, the schizophrenic meme is made to envelope that rides a wide of transversal connections.

2)   Slow the gears! Low-Fi can win the day. Deliberate slowing down sabotages a system whose sole means of survival relies on the process of speeding things up. The low-fi revolution was able to wrest rock and roll away from corporations in the form of punk. It was done again when ‘indie’ took on grunge’s slow dive into nu-metal and modern rock. Anyone who’s been to an underground punk show can tell you, it’s only partially about the music. Slowing down simultaneously demonstrates that there is something to the ‘human-scale economics.’  Every slowdown is a valorization of the contingency and the becoming-otherwise that cuts off flows. And that’s where lo-fi is won and lost – if it’s only about a repeatable aesthetic, it’s only a matter of time until the record labels catch on. But if there’s something else embedded in the culture – a DIY ethic or an anti-capitalist ethos – then the pathos can stay underground. (Films follow a similar trajectory: think Art House and Blair Witch to Hollywood’s Indie conglomerates)

Create a Politics of Rhythm! If combined, speed and slowness can create a counter-rhythm to the rhythm of Capital and the State.  Like the combination of waves the to make interference, the combination of rhythms results in a new pattern. First, one must first produce a rhythm that is out of sync.  Only then can one begin to experiment, opening up new worlds of motion through improvisation.

[1] The Poverty of Philosophy, Chapter 2