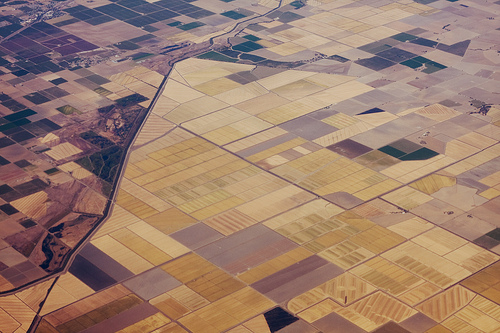 Replacing power/knowledge, I suggest the tripartite lines of rigid-supple-escape developed by Deleuze and Guattari in A Thousand Plateaus.  In their anti-essentialist ontology, Deleuze and Guattari posit that heterogeneous collections of elements come together in particular relations to form assemblages, contingent formations that produce certain effects.  Capitalism, for instance, is an assemblage.  One way to describe how assemblages are organized is by the lines that compose them.  For Deleuze and Guattari, there are three types of organizing lines: supple lines, rigid lines, and lines of flight.  Supple segmentarity is a concept taken from ethnologists who needed a way to describe so-called primitive societies that lacked the mechanisms of power that order modern life.  Bodies and things are coded in order to prevent centralization, their organization exhibits the characteristic of a rhizome with loosely connected parts that work autonomously.  Rigid segmentarity is organized by different centers of power (the family, the state), building equivalencies between them are bringing them together into a constellation that enter into redundancy and resonate together.  The coding and territorialization of primitive societies is replaced by a univocal overcoding that produces sameness that determines the substance, forms and relations of segmentarity (ATP 209-213).  Lastly, there is the line of flight, absolute deterritorialization.  Not running away but a leakage, like drilling a hole in a pipe (204).

Following Daniel W. Smith, the whole of Deleuze and Guattari’s Capitalism and Schizophrenia series evokes the axiomatics-problematics distinction.  Capitalism is an intensive continuous multiplicity that is constantly unleashing other flows that are problematic from the perspective of governance – the four principle ‘tormenters’ from A Thousand Plateaus are resources/energy, population, food, and urbanism (468). Quoting Deleuze and Guattari,

If Marx demonstrated the functioning of capitalism as an axiomatic, it was above all in the famous chapter on the tendency of the rate of profit to fall. Capitalism is indeed an axiomatic, because it has no laws but immanent ones. It would like for us to believe that it confronts the limits of the Universe, the extreme limit of resources and energy. But all it confronts are its own limits (the periodic depreciation of existing capital); all it repels or displaces are its own limits (the formation of new capital, in new industries with a high rate of profit). This is the history of oil and nuclear power. And it does both at once: capitalism confronts its own limits and simultaneously displaces them, setting them down again farther along. (ATP: 463)

Therefore the fundamental operation of governance is to control these deterritorialized flows by axiomatizing them.  And constant process of creating new problematics means axiomatization is never complete, not because the axioms fail but because the problematics are always changing.  Quoting Smith:

To take one well-known example: for Deleuze ― minorities are, in themselves, nondenumerable multiplicities; they can be brought into the capitalist axiomatic by being denumerated, counted, given their identity cards, made a part of the majority (which is a denumerable multiplicity, i.e., a multiplicity of discrete numerical elements); but there is also a power to minorities that comes from not entering into the axiomatic, a power that does not reduce minorities to a mere ”tear” or ”rupture” in the axiomatic, but assigns to them an objective and determinable ontological positivity of their own as problematic. “The issue is not at all anarchy versus organization,” writes Deleuze, “nor even centralization versus decentralization, but a calculus or conception of problems of non-denumerable sets, against the axiomatic of denumerable sets. Such a calculus may have its own compositions, organizations, and even centralization; nevertheless, it proceeds not via the States or the axiomatic process but via a pure becoming of minorities.”

So if governance is capture, real movement may only be possible by avoiding governance altogether and affirming the ontological positivity of resisting axiomatization.  Even if resistance is pursued to be subvert power rather than seize it through trench warfare, it already cedes too much to the opposition by giving it ‘power’ leaving us only with ‘resistance’ to that power – like a war of maneuver with two positions eternally locked into a conflict over who is the king of the hill.  In contrast, following the three forms of lines and the concrete assemblages where they are found, it is possible to form a strategy without resistance but escape and therefore a politics without war at all. Rather than trying to wrest the monopoly of violence from sovereignty through war, escape affirms the positivity of deterritorialized flows.  Struggle and conflict would take place in the interstitial space between war and peace, where the binary machine that tries to mark movement only through ‘win’ and ‘loss’ is short-circuited.  Only by avoiding total victory or total defeat can the present state of things really be abolished.

This tri-partite model is particularly well suited to describe the movement within the axiomatic-problematic distinction.  It acknowledges that forms like capitalism are process-based, and therefore immanent material conditions must be considered, as well as the contingent set of possibilities found at each moment – paying particular attention to recuperation, how elements move between assemblages, overlap, intensify and sometimes push a system past a threshold that transforms that assemblage it’s in.  As a point of clarification, it would be easy to overplay the difference between the three lines.  In contrast, these lines work together in mutual immanence.  The rigid totalitarianism of the National Socialist State was born out of millions of tiny fascisms, “rural fascism and city or neighborhood fascism, youth fascism an war veteran’s fascism, fascism of the Left and fascism of the Right” (ATP 214).  But lastly, none of the line are normatively good or bad, but useful.  They however do chart out potential uses and pitfalls.

2 thoughts on “Lines in the Sand”