This is an excerpt from my forthcoming essay in parallax that provides a Deleuzian theory of the State by way of cinema, cultural studies, and rhetorical theory.

Defining the state as a virtual concept requires an explanation of the virtual in Deleuze’s work. Deleuze does not mean simulated, as in ‘virtual reality’, in fact: ‘the virtual is opposed not to the real but to the actual’.[1] The virtual and the actual together make up two mutually-exclusive sides of the real.[2] The actual is a given states of affairs that is populated by bodies. The virtual is a ‘pure past’ of incorporeal events and singularities that have never been present, which have ‘the capacity to bring about x, without (in being actualized) ever coming to coincide or identify itself with x, or to be depleted and exhausted in x’ while ‘without being or resembling an actual x’.[3] In this sense, the virtual includes all potential worlds, everything that inhabits them, all of their really-existing potentials, and their every potential to differ that coexists with he actual.[4] To illustrate the complex character of the virtual, Deleuze is fond of quoting Jorge Luis Borges, whose ‘The Garden of Forking Paths’ includes a fictional book of Chinese philosophy that creates an opening ‘to various future times, but not to all’. [5] ‘In all fiction, when a man is faced with alternatives he chooses one at the expense of others’, he writes, ‘in the almost unfathomable Ts’ui Pên, he chooses – simultaneously – all of them’ and thus ‘creates various futures, various times which start others that will in their turn branch out and bifurcate in other times’.[6] In fiction, the book is able to depict the virtual as ‘an infinite series of times, in a dizzily growing, ever spreading network of diverging, converging and parallel times’ that creates a ‘web of time’ – ‘the strands of which approach another, bifurcate, intersect, or ignore each other through the centuries’ and thus ‘embraces every possibility’.[7] END_OF_DOCUMENT_TOKEN_TO_BE_REPLACED 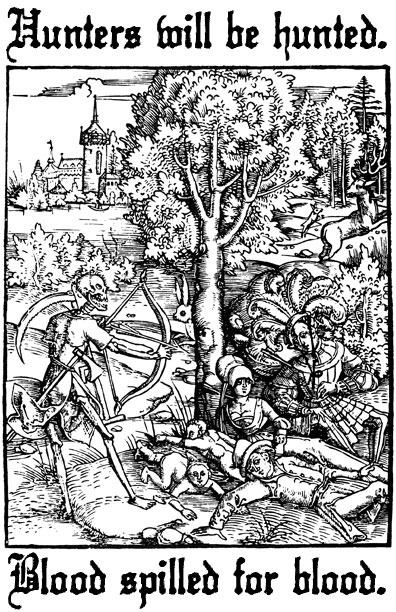 Expansions on the earlier State and as a Virtual Object paper. — PS: after discussing it w/ Gregg Flaxman, I’ve decided to “deontologize” the whole paper to sharpen the ontology/virtuality divide.

Marxists Michael Hardt and Antonio Negri have a useful illustration of a similar abstraction in their 2000 book Empire. According to Hardt and Negri, colonialism works as an abstract machine (a term synonymous with abstraction or virtual object). The abstract machine of colonialism, they say, creates a dialectic of identity and alterity that imposes binaries divisions on the colonial world.[1] The identity of the European Self, for instance, is produced through the dialectical movement of its opposition to and power over a colonial Other. The prevailing critique of colonialism in the early 20th century responded itself dialectically by revealing that the differences and identities created by colonialism appear “as if they were absolute, essential, and natural” but are in fact incorporeal and therefore function “only in relation to each other and (despite appearances) have no real necessary basis in nature, biology, or rationality.”[2] Hardt and Negri name two conclusions to this dialectical critique: first, that the European Self must continually use material violence against its Other to sustain the dialectical appearance of corporeal power, and second, that such a negative dialectic of recognition is hollow and prone to subversion. But reality itself is not dialectical, only colonialism is, Hardt and Negri contend.[3] And because dialectics is one only mode in which abstract machines operate, they suggest that the effective response to colonialism is not a negative antithesis, such as the negative project of négritude or Sartrean cultural politics. An effective response, they say, is the reciprocal “counter-violence” of Franz Fanon and Malcolm X, which produces a separation from the movement of colonialism. Such violence is not itself political, yet the violent reciprocity of “a direct relation of force” breaks the abstract bond holding together incorporeal colonial power and poses a disharmony that arrests the colonial dialectic while opening a space in which politics can emerge.[4]

As Hardt and Negri go on to describe Empire, they do not call it an abstract machine, but perhaps we should. END_OF_DOCUMENT_TOKEN_TO_BE_REPLACED

The State as a Virtual Object [[or how Max Stirner can get you hanged]]
Rethinking Marxism 2013
PS: after discussing it w/ Gregg Flaxman, I’ve decided to “deontologize” the whole paper to sharpen the ontology/virtuality divide.

Japanese director Nagisa Oshima’s 1968 film “Death by Hanging” begins with the execution of an ethnic Korean man, R. Miraculously, the hanging does not kill him; in fact, its only effect is that it erases his memory (08:23). Taken by surprise, officials debate the law and decide that execution is only just if a person realizes the guilt for which they are being punished (10:55). In an effort to make R admit guilt for a crime that he has no memory of committing, the officials simulate his crimes, which only leads to an absurd comedy of errors that exposes the racist, violent dimension of the nationalist law and history. R finally admits to the crimes but he maintains his innocence, which motivates him to debate the officials (49:30). “Is it wrong to kill?” R asks. “Yes,” they respond, “it is wrong to kill.” “Then, killing me is wrong, isn’t it?” R replies and then extends his argument “… A fine idea. First we kill the murderer… …then, being murderers, we’ll be killed, and so on and so on.” The official rejoinder is a predictable one: “Don’t say such things! We’re legal executioners! It’s the nation that does not permit you to live.” To which R responds: “I don’t accept that. What is a nation? Show me one! I don’t want to be killed by an abstraction” (52:52).

Less than a decade later, French historian Michel Foucault aired similar frustrations to R, though in the context of the genealogical study of power. Intellectually dissatisfied that “the representation of power has remained under the spell of monarchy,” he claims that long after the rise of the Republic, “we still have not cut off the head of the king” (Foucault, History of Sexuality, 88-89). END_OF_DOCUMENT_TOKEN_TO_BE_REPLACED

Marxists Michael Hardt and Antonio Negri have a useful illustration of a similar abstraction in their 2000 book Empire. According to Hardt and Negri, colonialism works as an abstract machine, a term synonymous with abstraction or virtual object. The abstract machine of colonialism, they say, creates a dialectic of identity and alterity that imposes binaries divisions on the colonial world (Empire, 128-129). And while differences and identities are created by colonialism “as if they were absolute, essential, and natural,” they in fact function “only in relation to each other and (despite appearances) have no real necessary basis in nature, biology, or rationality” (129). Hardt and Negri do not go as far as to call Empire an abstract machine, but perhaps we should. Customary definitions of Empire usually focus on a polycentric sovereignty of global governance as it intersects with the postmodern production of informatized, immaterial, and biopolitical products. In contrast, I contend that Empire arrives as an entirely incorporeal entity that lacks its own body and is deprived of a material existence to call its own. However devoid of existence, Empire persists as the force behind a concept for organizing and directing the capitalist world market. As a result, Empire operates through management and circulation, but it is not extensive with its products. Perhaps the most powerful example of the incorporeal transformation is the transformation that occurs when a judge declares the accused to be guilty of their crimes – transforming an alleged criminal into a real one (Deleuze and Guattari, A Thousand Plateaus, 80-81).

We can now return to the interrupted scene of Oshima’s film, knowing more about the abstraction that wants to kill R. END_OF_DOCUMENT_TOKEN_TO_BE_REPLACED

Contrary to Foucault’s shallow definition of the state, French Marxists Gilles Deleuze and Félix Guattari treat the state as a ‘virtual object’ that is neither an ideological effect nor solely repressive – thus avoiding the crude terms of Foucault’s brief argument from the classic governmentality lecture. END_OF_DOCUMENT_TOKEN_TO_BE_REPLACED